As if I don’t have enough going on in my life, today is not only part of the A to Z Challenge, it is also the Insecure Writer’s Support Group Wednesday. Though today’s post has little to do with writing insecurities, perhaps they will forgive this public service announcement.

I did promise to speak to Sexual Assault Awareness Month during this A to Z Challenge. Today is the kick off for the “Start by Believing” campaign happening in my area.

Start by Believing is a nationwide push to believe victims of sexual assault when they find the courage to report their attack. All too often, the victim is treated as the perpetrator. At the very least, a victim is looked upon with suspicion.

This campaign began in 2011 and has reached 130 communities in the U.S. and throughout the world. The goal is to be a Start by Believing nation. An online video shows the difficulties faced by victims and survivors. 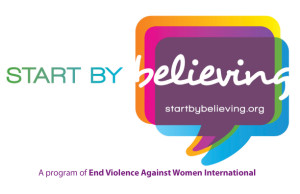 Our community is honoring the victims and survivors throughout this month by having a walk through the streets and by a public awareness campaign. We will also be having a Self-Safety Seminar on April 26th.

Believing our victims during one of the most difficult times in their lives is important as well as walking with them throughout the process. The work never ends.

The Simplest Form of Radical Self-Care